What is Qi / Chi in Feng Shui? 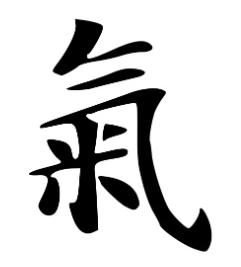 Feng shui is an art, philosophy and science of creating healthy, safe, resourceful homes and workplaces. This art is based on fundamental principles of balance and harmony. The purpose of feng shui is to increase your overall vitality or life force, called by the Chinese Qi or Chi. This concept is present in many cultures, for example, the Japanese call it Ki, in Hindu tradition it is called Prana and Christians call it the Holy Spirit.

Definitions of the concept of qi/chi

The classical Chinese definition of qi

Qi is usually translated as ‘breath’ or ‘air’ or universal life force. Qi is the most important aspect of Chinese medicine. Qi is “the idea that the body is pervaded by subtle material and mobile influences that cause most physiological functions and maintain the health and vitality of the individual.” (Micozzi, 2015). Classical feng shui texts suggest that qi gathers on the surface of the water (feng shui = wind–water).

“The Classic says that if qi rides the wind it is scattered; if it is bounded by water it is held. Ancient men gathered it, causing it not to be scattered and curtailed its area of circulation. Hence this is referred to as fengshui. The method of fengshui is, first of all, to obtain water and secondly to store from the wind.” Guo Pu, Gu Ben Zang Jing Nei Pian (Book of Burial Rooted in Antiquity), in Jin Dai Bi Shu, no. 42, vol. 5 of Ji Gu Ge

“Qi circulates through the earth according to the geodetic force of the earth. It gathers where the geodetic force stops. The qi follows the trunk of a hill and branches along its ridges. The Classic says that if the qi rides the wind it is scattered, if it is bounded by water it is held.” Guo Pu, Gu Ben Zang Jing Nei Pian (Book of Burial Rooted in Antiquity), in Jin Dai Bi Shu, no. 42, vol. 5 of Ji Gu Ge

To sum up, if you know how qi behaves it’s very useful because you can manipulate, moderate, mediate and modulate qi and qi flow. But if we only know what qi does we only know about it’s relationship between itself and other things and how it’s affected by other things. Physics, physical science and electrical engineering are the best tools to unravel how it works. So, we still don’t know what qi is and its intrinsic qualities and characteristics independent of its relationships with other things, independent of its behaviour. This is called the problem of intrinsic nature.

Qi concept in other cultures

The modern and scientific definition of chi – charge and consciousness

In physics, charge (Q) is the closest concept to chi. A charge is composed of positively and negatively charged particles which would fit the concept of yin and yang which is a matter of attraction and repulsion. Also, plasma (which is a cloud of charge) relates to chi, and scientists suggest that 99.9% of the visible universe is made of some form of plasma. See the video below about plasma to understand the electrical, ambient and radiant nature of chi. One oriental  feng shui book, the Burial Book, states “Chi is dispersed by the Wind and gathers at the boundaries of the Water.” The Oriental people accurately noticed that chi is attracted to water which is confirmed by science ie water attracts a charge. I and Dan Winter are probably the only experts to define chi as charge. Most feng shui authors regurgitate the old adage that chi is life force without understanding what it is and without explaining what is this mysterious ‘life force’ is.

Some scientists could argue that charge is just another external description of the behaviour of qi – just one perspective, as it is from the outside in terms of its behaviour. Some researchers suggest now that qi, from the inside and its intrinsic behaviour, is pure consciousness.

In short, qi could be described from two perspectives. Physical science could describe it from the outside, from a quantitative perspective, in terms of its behaviour as charge. And qi from inside, from a qualitative perspective, in terms of its intrinsic nature, is constituted of forms of consciousness. This is a kind of panpsychism in action which is the ancient view that consciousness is fundamental, ubiquitous, underlining feature of reality – the type of panpsychism that is or could be stripped of any mystical connotations. To my understanding, so far, nobody has postulated this simple and elegant working definition and explanation of what specifically qi is: charge and consciousness.

Obviously, others and poets talked about similar insights. For example,  William Blake said beautifully and concisely, “The World, when every particle of dust breathes forth its joy.” echoing the consilience of knowledge and wisdom, matter and consciousness. And then Blake marvels at “How do you know but ev’ry Bird that cuts the airy way, Is an immense world of delight, clos’d by your senses five?”

“I regard consciousness as fundamental, matter is derivative from consciousness. We cannot get behind consciousness. There is no matter as such; it exists only by virtue of a force bringing the particle to vibration and holding it together in a minute solar system; we must assume behind this force the existence of a conscious and intelligent mind. The mind is the matrix of all matter.” Max Planck, 1918 Nobel Prize in Physics

More and more people recognise that we now live in the age of energy. From the Internet to all forms of communication to energy medicine to quantum physics – the fact is we are now living in a world where at least half of what is influencing and controlling us is in energy form.

There are many factors affecting qi:

So feng shui can affect your chi and the chi of your environment but it’s not the most important factor. Nelson Mandela was affected by the chi of his prison cell but his personal chi and chi of others was the key influencer.

In feng shui, your qi is influenced by many things such as light, colour, plants, shapes, the arrangement of furniture, etc. Together these characteristics create the chi of the home and workplace. Chi is maximised when extreme environment characteristics (yin and yang) are in balance.

In quantum physics, there is the concept of the observer effect which states that observing a situation or phenomenon changes that phenomenon. Some researchers suggest that consciousness is an informational field or morphic field in which all phenomenon takes place. Others suggest that we live in a holographic/virtual / matrix/simulation reality where we are the co-creators of this reality.

Qi as a frequency

All energy travels in waves or frequencies, and each element has its own frequency band. Recognising and enjoying a particular element opens our minds and hearts to the natural energy resonant with the element. Through this process of resonance, we begin to pull in. When a C note is played on the piano and a guitar is nearby, the guitar string automatically will begin to resonate and make a C sound. In a similar manner, as you feel natural energy, you can begin to resonate with all the frequency of nature and open yourself to increase your access to it. In a sense, each element is like a particular channel on TV. All of the stations are always being broadcast. When we turn to a new channel, we are just picking a different frequency. The frequency is always being sent out regardless of whether or not they are being picked up. When elements are rich and vibrant in pure natural energies, then these particular frequencies are awakened in you and you can begin to access these energies. A fresh rose, for example, is one of the most healing frequencies in nature (80/100 – hence the name of my feng shui school – The White Rose Feng Shui School).

“If a geomancer can recognise ch’i, that is all there is to Feng shui.”
Sarah Rossbach, author of Feng Shui Design

Chi has been publicised and studied by the Chinese government and researchers suggest that principle scientific view of chi is that it is a low-frequency magnetic field (Sun, 2012).

To find comfort, we are automatically attracted to situations that include the element we need most. Some people love to sit in the sun, while others enjoy long baths. This often is because one person needs more fire energy while another requires more water energy. When our hearts are open we are attracted to what we need, and when our hearts are closed we are repelled by the elements we need most. For example, when you’re depressed you may dread going for a walk in nature when that is just the thing you need to do and your intuition is telling you to do so. “When it comes to your physical health – as well as the health of your life – your own intuition always alerts you to imbalances in your body, mind and spirit.” says Caroline Myss so listen to your intuition.

How to measure chi

“Whatever cannot be measured, cannot be real.”, said Max Planck and then the management thinker Peter Drucker said: “you can’t manage what you can’t measure.” Feng shui, in a nutshell, is about how to manage and moderate chi and chi flow. Many specific aspects of feng shui can be measured with different meters and instruments, for example, electromagnetic pollution and therefore solutions and ‘cures’ can be measured too. Other more subtle aspects such as ‘predecessor chi’ which is a residue left by previous owners of the property are more difficult to measure (although new developments in space conditioning offer hope of measuring it and changing it). And obviously, we use our senses to detect subtle energetic changes in our homes and workplaces. Also, our language can help us to identify if these sensory experiences are real or not. For example, if you say ‘I feel the tension in the office’, probably you are right. On the other hand, if you say ‘I think, there is tension in the office.’ – probably you were just imagining it. If after installing a geopathic stress harmoniser and negative ions generator you sleep better and have more energy in the morning – these interventions are most likely working and are real.

In this introduction to electrical nature of life, plasma, charge and chi – you can get a good overview of how chi fits into modern feng shui and the science behind it.
Dirty electricity affects our energy – watch the part where Paul talks about dirty electricity – from 1.03.