Read the key lesson that rabbits have to offer us in 2023 below: have a bigger view of life and be vigilant (something to do with rabbit’s eyes).

1. Identify your feng shui (gua) star – there are different ways, but the easiest is to look at this chart below. If you’re running a business, look for the feng shui star of your business when it was set up. 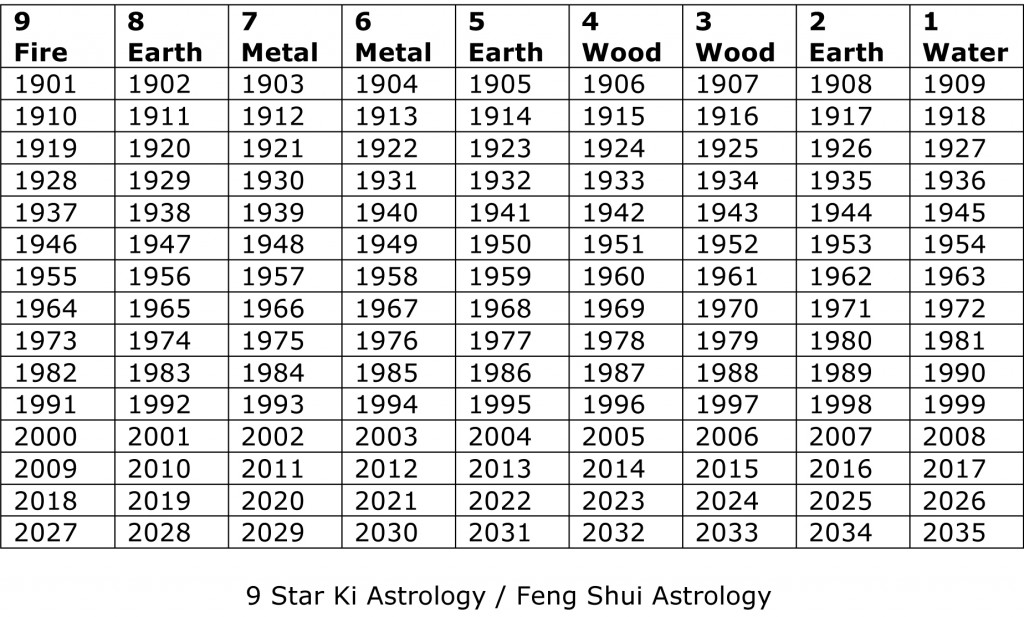 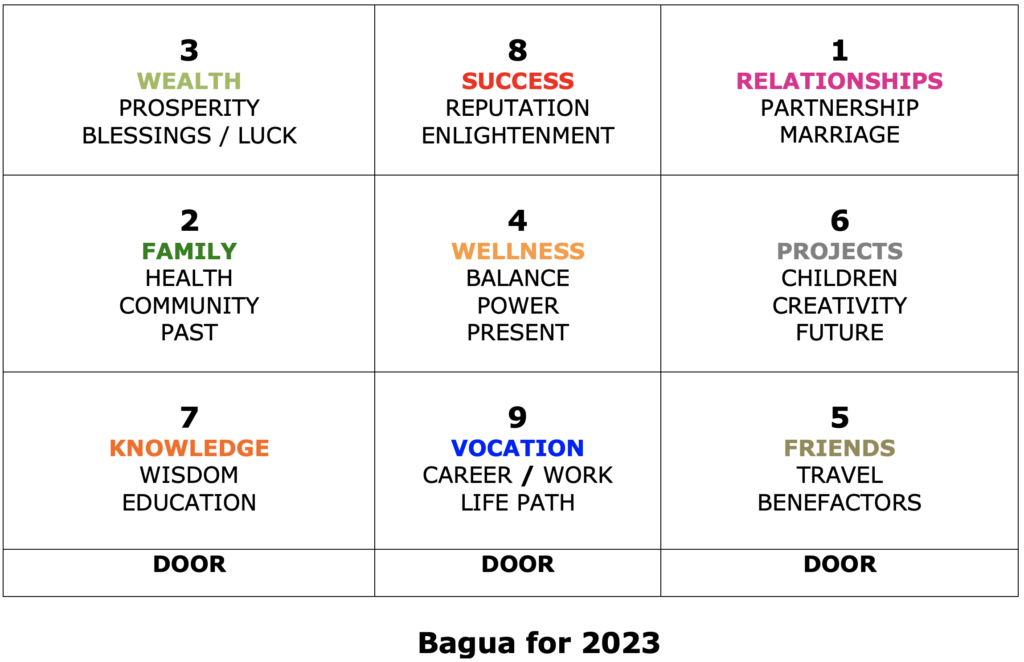 3. And then do something to activate the positive energies that will help you manifest your dreams, intentions, purposes, goals and needs.

One idea is to use water element (since it’s a water rabbit year) i.e. add water features, images of water or feng shui prosperity fish such as koi carp or the colour blue or black, which is the water element colour, for all feng shui interventions.

If water element is not your thing, you can use other colours (remember: feng shui = intention + ritual or, in other words, feng shui = priming). For example, the Pantone colour of 2023 is Viva Magenta. Get a towel in this colour or use it as your mobile phone wallpaper to get the benefit of the “vibration”/”energy” of this colour. Magenta is a very interesting colour. Magenta is an extra-spectral colour because it is not found in the visible spectrum of actual light – it actually doesn’t have its own wavelength (our brains perceive different colours as different wavelengths of light). It is, therefore, physiologically and psychologically perceived as the mixture of red and violet/blue light, with the absence of green. So is magenta a real colour? It seems that our minds/brains construct magenta to bridge the gap between red and violet. 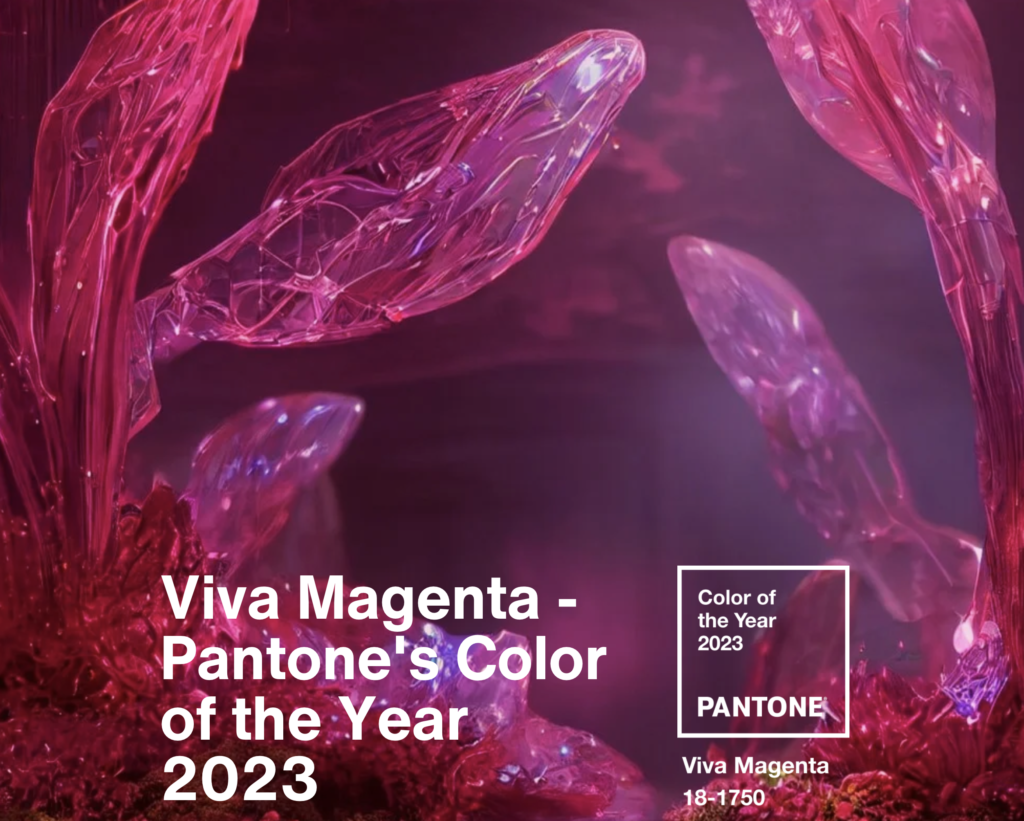 Symbolically speaking, magenta conveys universal harmony and emotional balance because it contains the passioned and energetic red, and the restrained, introspected and quiet energy of violet. It is said that it projects compassion, kindness and cooperation. Magenta is an optimistic colour of cheerfulness, happiness, contentment and appreciation. 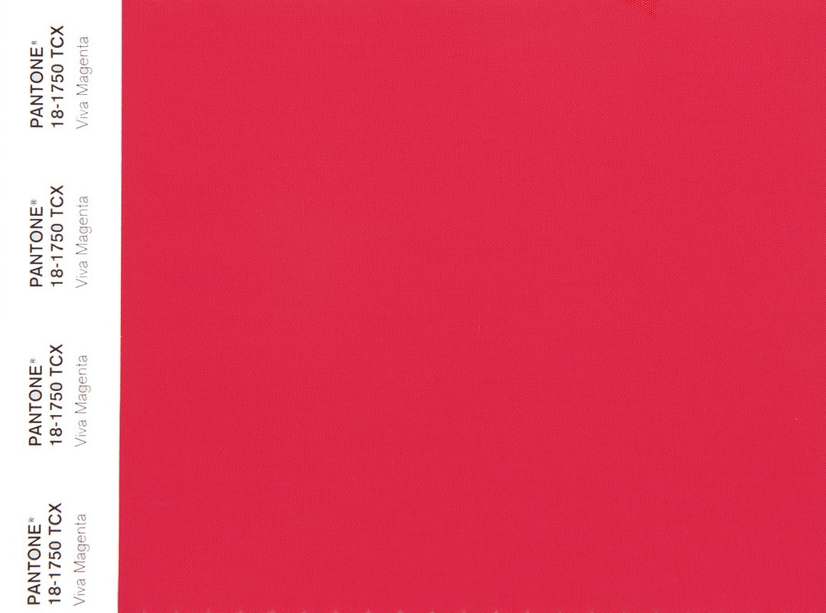 The top feng shui remedies to activate bagua are:

13. celebrations such as parties, house-warming parties or any other occasions that bring people’s chi to boost feng shui of your home or workplace. So, celebrate the New Year on the 1st of January 2023 and Chinese New Year’s Eve on January 21st, 2023, Chinese New Year’s Day on January 22nd, 2023, and The Lantern Festival on February 5th, 2023.

14. Space-clearing is always recommended to clear past energies, blocks and problems from the past to open up space for new. There are many ways of doing space clearing to clear, cleanse and get rid of any stagnant energies, especially clutter which is considered as sha chi/qi or negative energy. For example, you can use sound and music (bells, drums, singing bowls, cymbals, harmony balls, tuning forks or just clap), fire element i.e. burn things such as sage, incense, or candles – although I don’t recommend personally burning things because these will create air pollution – use space clearing mists instead e.g. Space Clearing Australian Bush Flower Essence or Findhorn Flower Essence Sacred Space Clearing Room Mist or place salt in bowls in four corners of the room for 2 days and then discard it or placing some water with a few drops of essential oils such as lavender, sage, etc.

15. Do something new, which is one of my favourite feng shui rituals. I always wear something new or do something new on the day – to boost my dopamine levels and help me to mark and shift into the new vibration of 2023 for whatever goal, purpose or dream or intention (feng shui = intention + ritual… read below). For 2023, I’m getting new socks and a towel in viva magenta’s colour, and we’re going to experience Battersea Power station’s lift 109 on the day at noon and a new exhibition at the Tate Modern. I’m also going to set viva magenta on my mobile phone as a background.

16. Also, I’m going to do MOT of my home and workplace for 2023 (clear some stuff, activate bagua, get some plants, rearrange my books, and write my goals for 2023 because research suggests that people who do that usually achieve them, etc), which I strongly recommend you do too. Call your feng shui expert or me :).

Feng shui = intention + ritual
A new year offers a whole new beginning as well as a time to reflect on your past and consider your future. It’s a well-recognised phenomenon that maintaining new resolutions proves difficult for people. In feng shui we often work with intention instead of goals which are new year resolutions. Intentions are “a directed impulse of consciousness that contains the form of that which you aim to create.” claims Deepak Chopra. Intentions are force fields / vibrations that shape and guide the little steps you need to take towards bigger goals. Your inner intentions, through feng shui rituals, will take a form that is intended. In one study, a double-blind, randomized, placebo-controlled experiment investigated whether chocolate exposed to “good intentions” would enhance mood more than unexposed chocolate and proved that the mood-elevating properties of chocolate can be enhanced with intention. This study suggests that how you do your feng shui ritual, with what intentions, can potentially influence the outcome. The study confirms that “Most cultures have maintained the belief that spells, prayers, or intentions can be mentally imprinted into substances, which if ingested, would help bring about those intentions. The act of blessing water, wine, and bread still plays a central role in many religious rituals, and even in secular contexts the practice of toasting or offering special salutes with food or drink is universal. Occasionally, consuming blessed food or water is said to result in remarkable healings. The conventional explanation for such reports is that belief becomes biology, that is, that any such healings are due to the placebo effect.”

The characteristics and lessons of the Yin Water Rabbit year: keep seeing the big picture and stay vigilant

Rabbits are small vegetarian mammals with fluffy, short tails, whiskers and distinctive long ears (there are 29 species around the world). Fortunately, the rabbit’s eyes (on the side of their head, placed up high) allow them to see almost 360 degrees around them and above them with their divergent (yin) vision, which keeps rabbits safe from predators. Unfortunately, such placement of rabbits’ eyes gives them a small blind spot directly in front of them which means that their convergent (yang), narrow vision/focus is limited. Also, rabbits have great senses of smell and hearing (they can rotate their ears 270 degrees), which are other helpful characteristics for defending themselves from danger. When they sense predators, they freeze to camouflage themselves with the environment.
My reading of this fact is that in 2023 we need to be vigilant and keep both types of attention working well:
1. narrow/focus and
2. broad/vigilant/open/peripheral.
Obviously, a broad/peripheral vision is more important than a narrow one, since the little bunny wouldn’t get near any food before it was eaten by a fox or a wolf, as the Chinese story goes.
In short, see the big picture of what’s going on and the fundamentals of the underlying trend and stay vigilant, as well as focus your practical and mental efforts on your surroundings and the situation at hand. 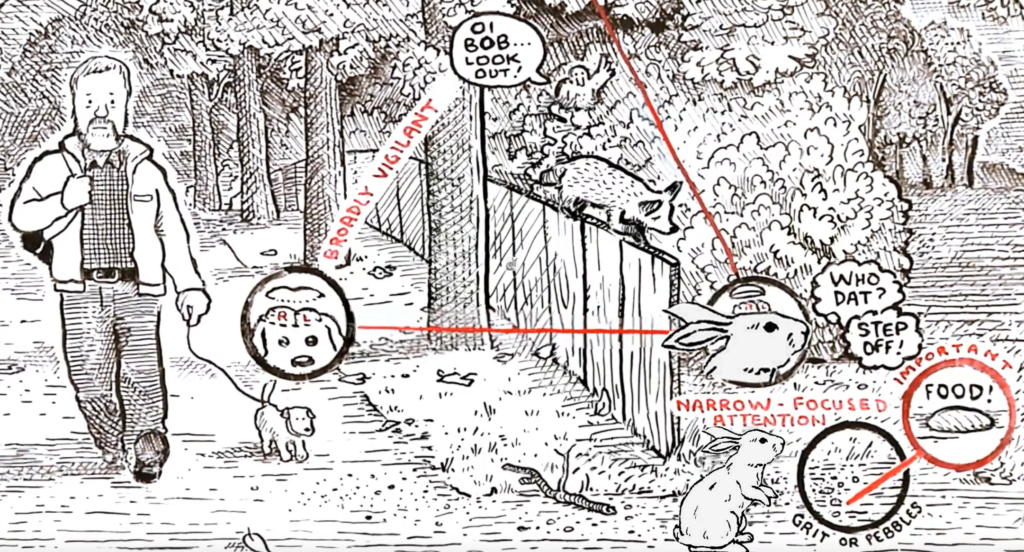 Be vigilant and cultivate a broad vision and narrow focus too

Research suggests that rabbits are clever animals and easily learn cues that might indicate a future positive event, e.g. sensing that when a bell rings, a treat will be forthcoming. They are known to learn to solve puzzles to get to their desired treats.

About 2% of the adult population has a rabbit, with an estimated 1 million pet rabbits in the UK.

Rabbits and good luck
Many people. including Franklin D. Roosevelt, during his presidential campaign, would carry around a rabbit’s foot as a good luck charm.

The Year of the Cat (Rabbit). The cat is the fourth animal symbol in the 12-year cycle of the Vietnamese zodiac and Gurung zodiac, similar to the rabbit zodiac sign in the Chinese zodiac. The characteristics correlated with the rabbit are attributed to the cat. The legend is that the cat was not included among the twelve animal signs because it was tricked by the rat into missing the banquet with the Jade Emperor and was not given a year, causing hostility between cats and rats. It is believed that the Vietnamese have the cat instead of the rabbit as a zodiac animal because the ancient word for rabbit (mao) sounds like a cat (meo). The year of the cat was popularised by a song with the same title, ‘The Year of the Cat’ by Al Stewart, which was recorded in London’s Abby Road Studios in January 1976 – still the year of the cat (but released in July 1976 which is the year of yang fire dragon). “The Year of the Cat” is probably the only song about the animal zodiac signs, and it’s probably the most famous song by Al Stewart (yang wood rooster), so it definitely worked for him.

How to wish someone a happy new year in Chinese
Cantonese: Gung Hay Fat Choy! (may prosperity be with you)
Mandarin: Xin Nian Kuai Le! (Happy New Year)