The Battersea Power station was opened today, Friday, 14 October 2022, at 10 am and this is my first take on it. The old Battersea power station has been converted into a shopping mall that is branded as iconic. This building was made famous (and iconic) by the cover of the Pink Floyd album Animals (apparently, one of the band members bought one of the high-end apartments in the building but we know for sure that Sting lives in an apartment next door on the west side in the Circus West Village ).

Basically, it’s just a much smaller shopping mall than Westfield with fewer places to eat (at the moment). There are about 100 shops but half were open today. In short, the feng shui of the place was okay today. Let’s unpack… and see if the Battersea Power Station has been feng shui-ed?

Lots of space
There is a lot of space to walk around but not enough places to just sit inside. I hope that they will add more benches to sit on in due course. You do want to sit from time to time to think where to go next (although it took me about 15 minutes to walk around the whole place). The main impression I got today was that lots of shops but not enough places to eat. The tagline for the Power Station is SHOP EAT DRINK PLAY. I would say at the moment is only SHOP and not much to eat, and no play. It also suggests work (Apple has an office there covering about 40% of the whole Power Station, six top floors ie 46 000 square meters for 1400 staff) and living (250 apartments). There are lots of flats and apartments to live around the whole place.

There were about 70 000+ visiting today (over the weekend this number probably will double). So let’s start with toilets. There are toilets but in a couple of areas only ie northeast and south-west of the building (quite a lot with wheelchair access all over the place though) – again not enough – maybe they were worried about the money going down the drain – and they haven’t spent any money on them. 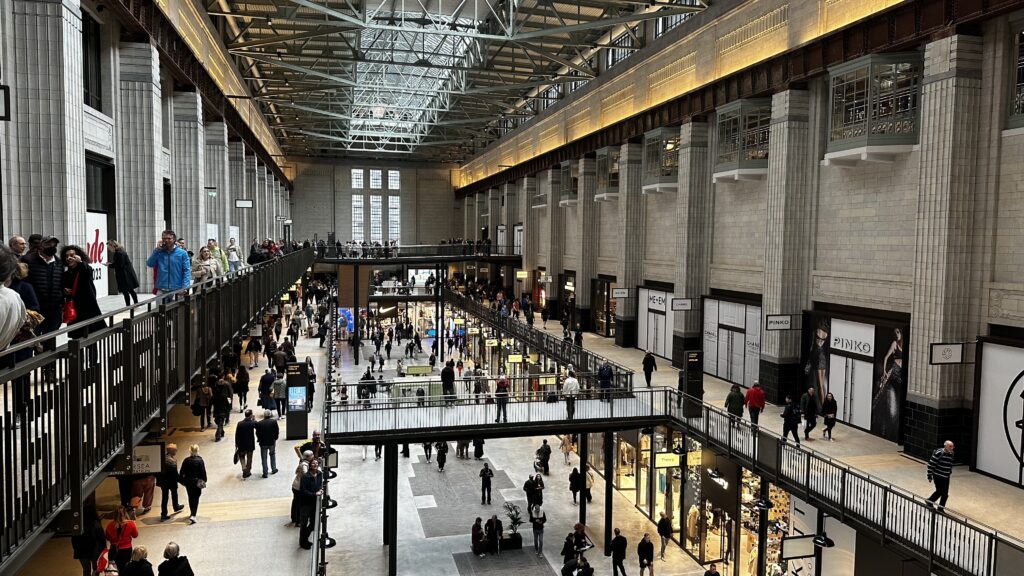 Inside of the Power Station Battersea London

Shopping
The shopping experience is similar to any other shopping mall except that there are fewer choices. You will see some low-end high-street brands and some high-end ones eg watches and electric cars. So a mix of expensive brand end and basic inexpensive brands. I got some rose hand cream and some fancy hair conditioner from one brand. Most shops don’t take cash so cashless mall. The opening hours are Monday to Saturday 10 am – 9 pm and Sunday midday to 6 pm. 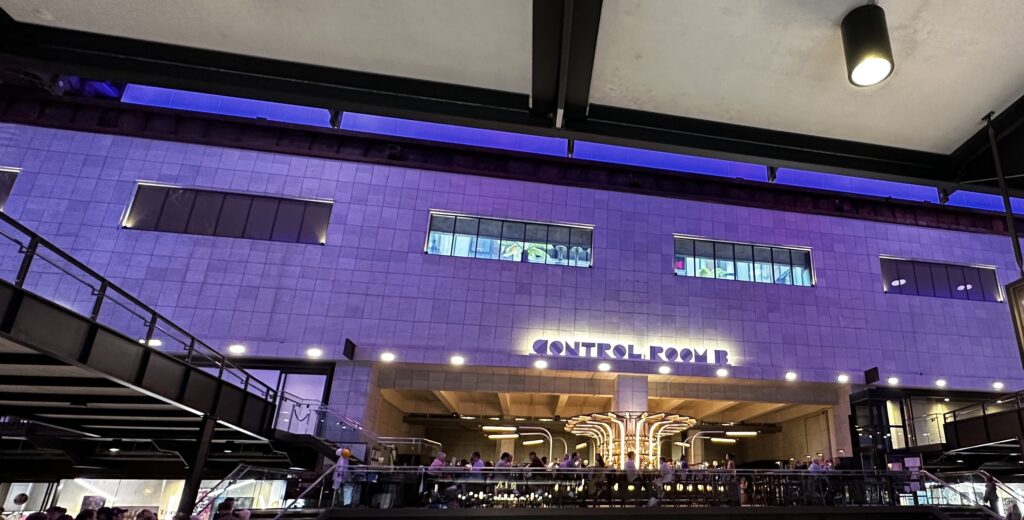 Eating
Eating there was quite disappointing. Not much to eat actually. Make sure you eat before you go there. Because you have to stay in line for half an hour to get a sandwich or for one hour to get pancakes. I hope in due course they will open a few restaurants where you can actually book and have a dinner or lunch. I was hoping to see more places to eat, similar to other places that I’ve visited in Lisbon, Copenhagen, Barcelona and elsewhere where the eating and social place was more important than just shopping. They could have dedicated one floor with seating overviewing the rest of the station – to just eating and the rest to shopping. Warning: weekends can be very busy and quite frustrating when it comes to eating or just even having coffee unless you like cueing.

Entertainment
There is not much entertainment there. There is one cinema but wasn’t open today. Also, there was one interesting-looking bar (Control Room B – see above), quite high up with a nice vista view on one section but again not enough seats – I’d have to wait today for half an hour to get a drink (disappointing). 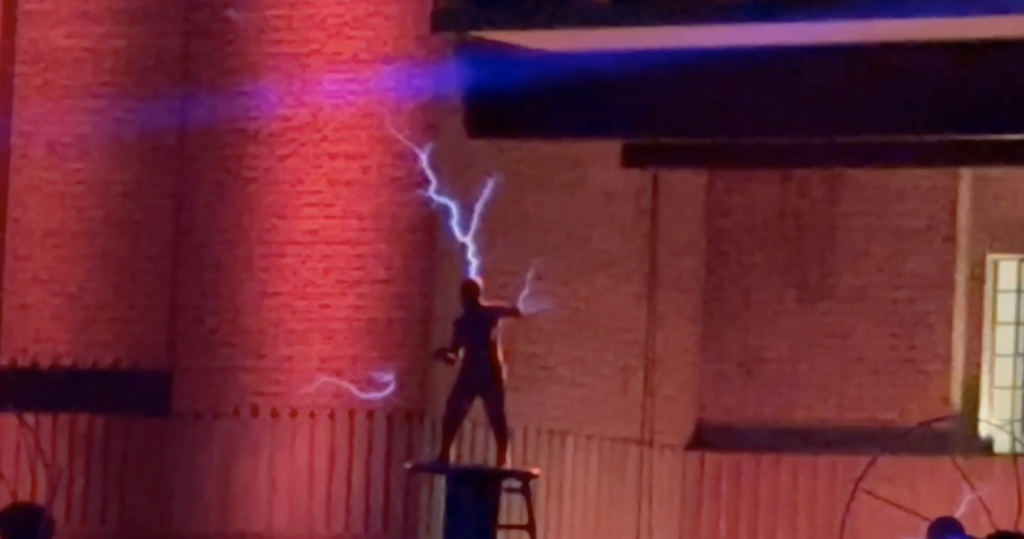 There was a buzz and lots of people today but not enough places to sit for a coffee or drink. People were waiting in lines to get a drink or something to eat for ages. Not my thing. I’m sure in time they will get organised and make it more functional. Not much to do actually apart from walking, shopping and sparse eating. In the evening there was a bit of an electric buzz with a Nikola Tesla-like show with a performer acting as an electric arc or arc discharge of the electrical current. I guess they were trying to generate some chi which in some feng shui interpretations is the charge.

5 elements: water, wood, fire, earth and metal
The overall element that dominates the whole place is the earth with the metal element supporting it according to the five-element theory. The earth element is visible with bricks and square shapes. The fire element isn’t strongly visible – the lighting is adequate. Most lighting features are round which balances the squares and angularity of the whole place. The wood/tree element is slightly visible with a few spiky plants integrated into benches inside. The big four chimneys are obviously hovering and giving uplifting energy of the wood element. The water element is physically missing – except that the Themes river is supporting the place from the north. But with 70 000+ people moving through the place – that’s a lot of water (human bodies are on average 80% water) and chi. 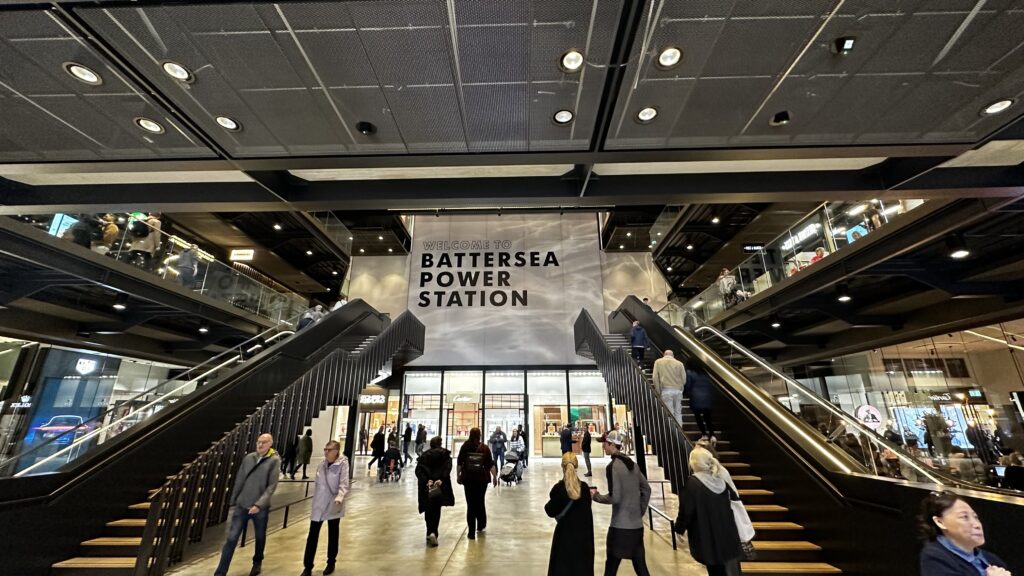 The “mouth(es)” of chi
There are two main entrances: one from the south and one from the north and two small ones from the east and west. The north entrance faces the river Themes and it’s wide and open. The south entrance is facing Malaysian Square which is more contained and structured. Both entrances are relatively open and inviting inside. On the outside, they are very open to attracting the maximum number of people and I guess chi. The north entrance inside leads directly to the staircase that goes down immediately to the ground level which gives a downward energy flow. The south entrance with its egg-shaped external structure has both staircases visible when entering the building (see above).

I didn’t spot anything, in particular, that would suggest that this place was feng shuied in any specific obvious way – just regular standard motley architectural design. No wow factor except the towering of the existing structure of the original building. So has the Battersea Power Station been feng shui-ed?

Has the Battersea Power Station been feng shui-ed?
The south entrance is called Malaysian Square because of the consortium of Malaysian investors who own the site development so I would expect that they must have looked at the feng shui of the place. The opening day is 14 October 2022 and in feng shui astrology of stems and branches are yang metal and yang (rat) water elements – overall good elements to have to support this business. At one point, during the opening time, there was a bit of drumming going on in the northwest part of the building (helpful friends and international business area according to the bagua model). I couldn’t find any references online about any specific feng shui experts working on this project. 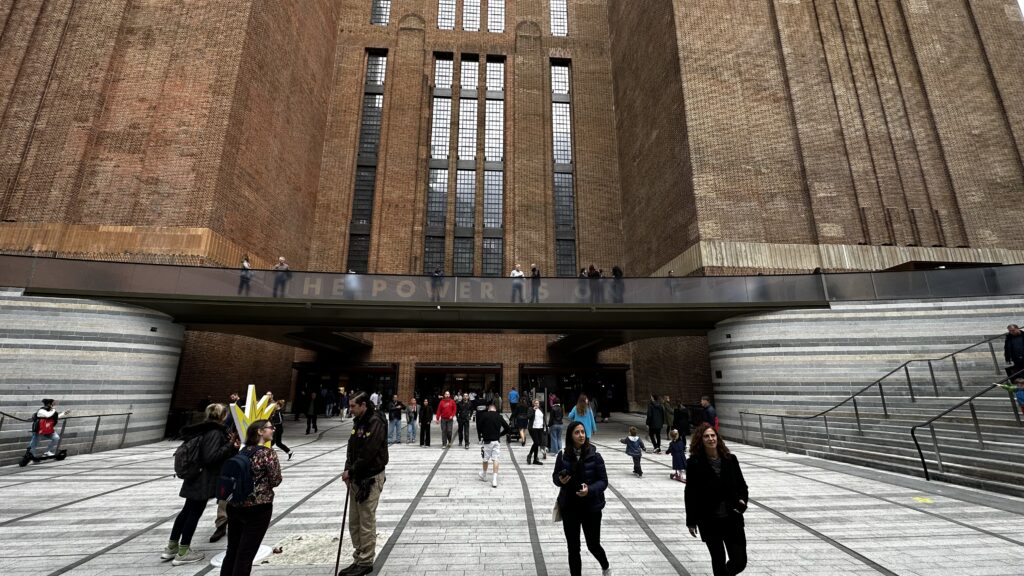 Chi flow
There are three levels ground, first floor and second floor. Different sections are connected with metal bridges which makes crossing easier. There are lots of dead spaces that have stagnant chi – especially underneath the staircases (which could have been used strategically for practical reasons such as seating, etc – people are trying to sit on very thin metal barriers that have been placed there to prevent people from doing so).

The flow of traffic with people moving in all directions looked a bit random without any specific energy movement and flow, therefore it looked like the chi wasn’t moderated in any way and got dispersed in many directions but contained within the structure of the building. One could say that the earth element is controlling the water element (humans). Wayfinding was helped with information stands but they don’t look very useful ie no specific arrows where to go and how to find toilets for example.

The place is dog friendly and there were a lot of people with dogs walking around which makes it interesting for dog lovers, which are many in Chelsea and Battersea (Battersea park is the mecca for dog lovers and walkers).

The noise level is relatively high inside because of the structure of the building.

The flooring is smooth with patches of bricks for extra stands that I’m guessing will come later. 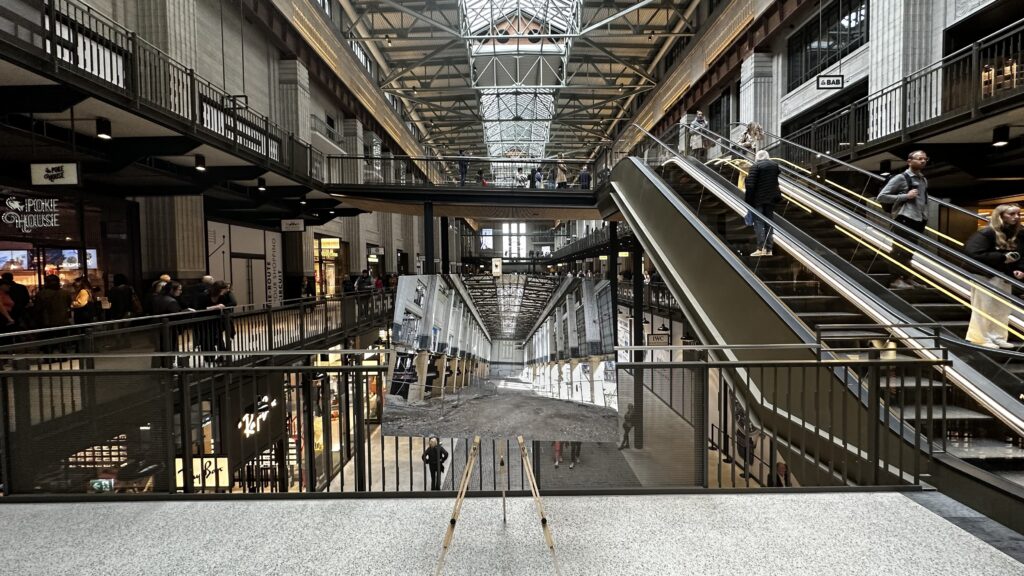 Predecessor chi/energy and iconic status – “when pigs fly”
In feng shui predecessor energy (chi) is residual energy or memory of the place. It’s a morphic field of the place (Sheldrake). Everything that happens in space also happens in time and memory is locked and attached to and in time (Bergson, Wittgenstein). Places are space-conditioned by the structures, events and people. Place attachment is an important aspect of space conditioning. Understanding the history of the place can give us some indication of what might happen next. One of the functions of feng shui is to harness the existing energies and moderate them accordingly. Obviously, new events and especially people will affect the space and condition it in new ways. That’s why opening events and all kinds of festivals that gather a large number of people are essential for the shaping of the places. At the opening weekend, over 250,000 people visit the place demonstrating the interest and attachment they feel to this iconic landmark. Place attachment is a “person-place bond that evolves from specifiable conditions of place and characteristics of people.” (Shumaker, Taylor, 1983). In this case, place identity is an attachment with emotional or symbolic meanings that are given by individuals. The Battersea Power Station is now a part of a person’s self-identity, especially for people who live there. 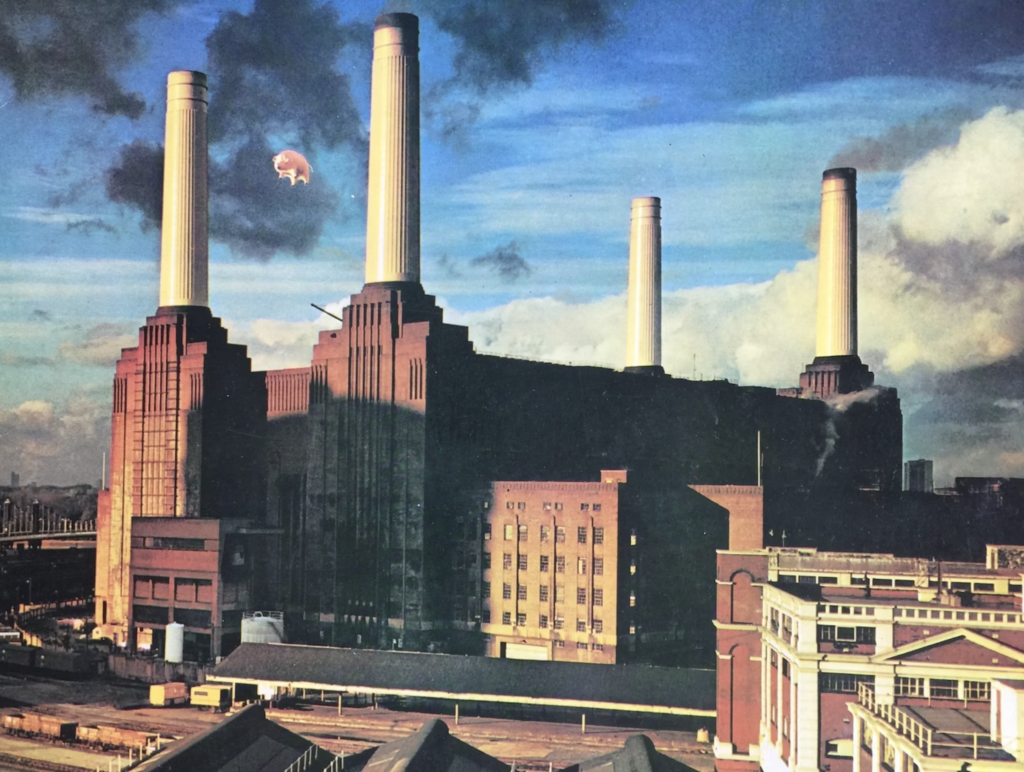 Summary of my first experience
My overall feng shui impression and the first experience are mixed. I would give this place a 3.2/5 today, mainly for the novelty and buzz of the opening day, however it has obviously high potential to live to its iconic image (probably 4.4/5). It will grow and develop as times go by and especial when it’s fully operational, with more businesses open there – generating power to the local area (although not much affordable housing was built on the site) and London. I’m glad that is finally open (after 40 years of inactivity), and after so many unsuccessful attempts to make it work in the past.

The Battersea Power Station in the evening today

Something to look forward to…
There will be a lift open to going up one of the chimneys (in the north-west) to have views of the river and around the area. https://lift109.co.uk/

It will be interesting how people who already live around the station and in the actual station feel about the sudden influx of shoppers. When the Battersea Power station was open the prices of the properties went up significantly. It would be interesting to watch what will happen, when until now, this relatively quiet and calm neighbourhood is becoming a very busy and commercialised place.

Posted in feng shui near me and tagged Feng Shui of the Battersea Power Station.