There have been many rumours about 10 Downing Street, probably the most famous address in London. It is not true that Cherie Blair had Downing Street feng shui-ed, for example. Although Donald Trump used feng shui in his business, it’s not clear if he feng shui-ed the Oval Office or White house.

Is feng shui of 10 Downing Street working?
This is a good question. In short, judging after the last two years, not really. But with a new PM, things might change… for better or worse. Hopefully, for better. Let’s not be ‘doubters, doomsters and gloomsters’. The door of 10 Downing Street is facing south, which from feng shui perspective is the direction for success, reputation, clarity, spiritual outlook, illumination, enlightenment, positivity and fame. Well, all those attributes will be at stake when Boris Johnson make it his home. Mr Johnson’s feng shui star is 9 and element of fire (born 19 June 1964) and south is his lucky, auspicious direction. So far, so good. 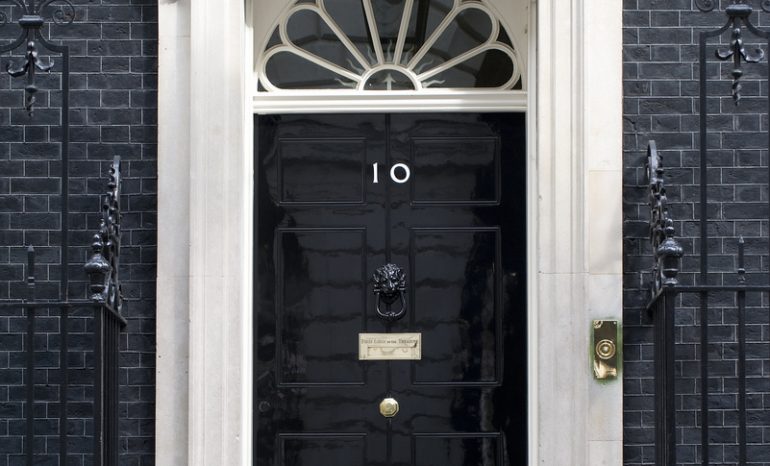 With all minsters crowding into Cabinet to squeeze up around the Cabinet table is now going to make it interesting to watch. The table looks small now. Originally, the coffin-shaped Cabinet table was commissioned by Harold Macmillan – more than half a century ago. It makes the table look “more coffin-like than ever”, according to one minister. What a metaphor.

The front door to 10 Downing Street
The front door design and colour haven’t been changed much for ages with its characteristic design and black colour, which is now world-famous. Although, in 1908 Herbert Asquith becomes Prime Minister and has the front door repainted dark green for a brief time. During the First World War soldiers heading to off to the trenches used to touch the lion head door knocker for good luck. Then it was made of cast iron and today it is brass and painted black to replicate the original. The actual door is a blast-proof steel door following an IRA mortar attack on Downing Street in 1991. The inside of the door is white and features a polished brass door handle on a backplate. The ‘0’ numeral is painted at a 37° degree angle sloping to the left which is found in the Roman’s ‘Trajan’ alphabet that was used by the Ministry of Works at the time. Read about how to feng shui your front door to your home or workplace

Feng shui for politics in 2019
It’s anyone’s guess what might happen in the UK’s politics in 2019. Prediction is harder every year. Would feng shui astrology help? 2019 is the year of earth/muddy pig.