Planetary electromagnetic pollution: it is time to assess its impact by Priyanka Bandara, David O Carpenter

b Institute for Health and the Environment, University at Albany, Rensselaer, NY, USA

© 2018 The Author(s). Published by Elsevier Ltd.
Under a Creative Commons license

As the Planetary Health Alliance moves forward after a productive second annual meeting, a discussion on the rapid global proliferation of artificial electromagnetic fields would now be apt. The most notable is the blanket of radiofrequency electromagnetic radiation, largely microwave radiation generated for wireless communication and surveillance technologies, as mounting scientific evidence suggests that prolonged exposure to radiofrequency electromagnetic radiation has serious biological and health effects. However, public exposure regulations in most countries continue to be based on the guidelines of the International Commission on Non-Ionizing Radiation Protection1 and Institute of Electrical and Electronics Engineers,2 which were established in the 1990s on the belief that only acute thermal effects are hazardous. Prevention of tissue heating by radiofrequency electromagnetic radiation is now proven to be ineffective in preventing biochemical and physiological interference. For example, acute non-thermal exposure has been shown to alter human brain metabolism by NIH scientists,3 electrical activity in the brain,4 and systemic immune responses.5 Chronic exposure has been associated with increased oxidative stress and DNA damage6, 7 and cancer risk.8 Laboratory studies, including large rodent studies by the US National Toxicology Program9 and Ramazzini Institute of Italy,10confirm these biological and health effects in vivo. As we address the threats to human health from the changing environmental conditions due to human activity,11 the increasing exposure to artificial electromagnetic radiation needs to be included in this discussion.

Due to the exponential increase in the use of wireless personal communication devices (eg, mobile or cordless phones and WiFi or Bluetooth-enabled devices) and the infrastructure facilitating them, levels of exposure to radiofrequency electromagnetic radiation around the 1 GHz frequency band, which is mostly used for modern wireless communications, have increased from extremely low natural levels by about 1018 times (figure). Radiofrequency electromagnetic radiation is also used for radar, security scanners, smart meters, and medical equipment (MRI, diathermy, and radiofrequency ablation). It is plausibly the most rapidly increasing anthropogenic environmental exposure since the mid-20th century, and levels will surge considerably again, as technologies like the Internet of Things and 5G add millions more radiofrequency transmitters around us. 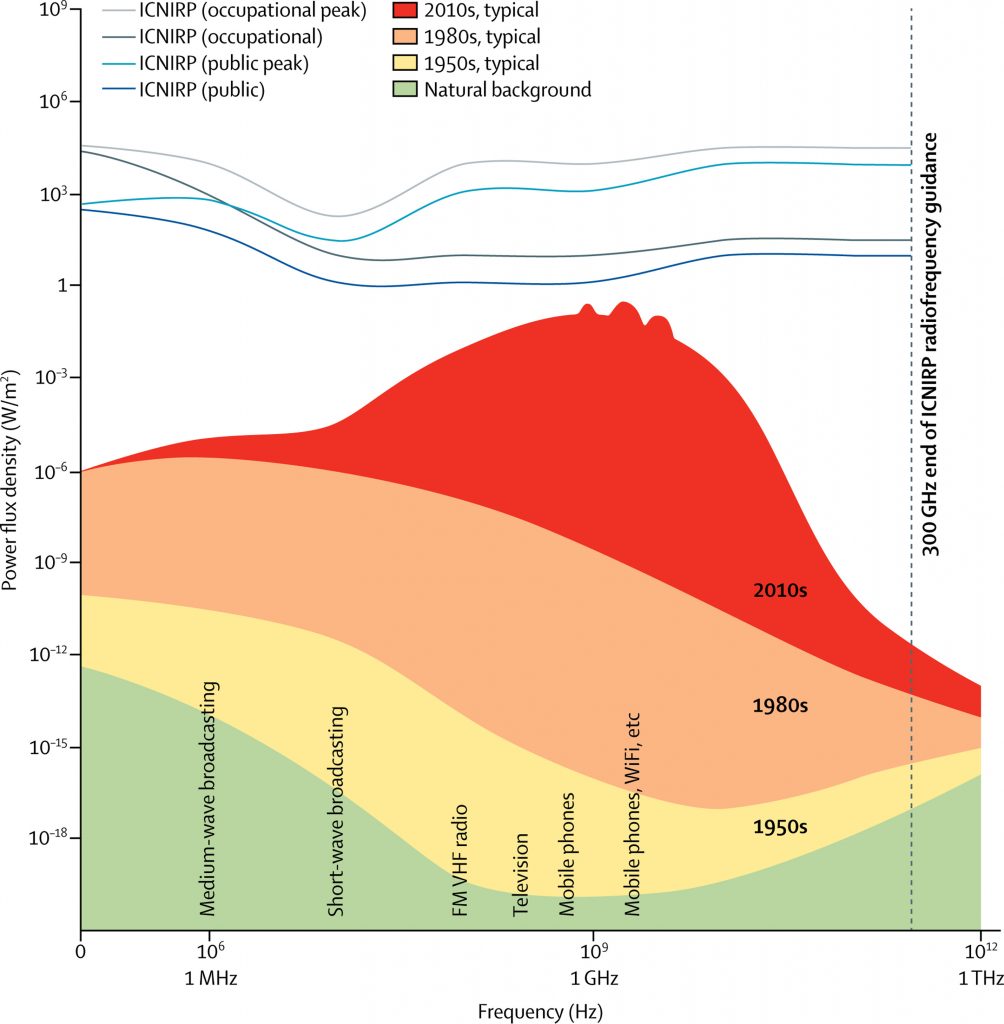 Anthropogenic radiofrequency electromagnetic radiation levels are illustrated for different periods in the evolution of wireless communication technologies. These exposure levels are frequently experienced daily by people using various wireless devices. The levels are instantaneous and not time-averaged over 6 minutes as specified by International Commission on Non-Ionizing Radiation Protection for thermal reasons. Figure modified from Philips and Lamburn12 with permission. Natural levels of radiofrequency electromagnetic radiation were based on the NASA review report CR-166661.13

Unprecedented human exposure to radiofrequency electromagnetic radiation from conception until death has been occurring in the past two decades. Evidence of its effects on the CNS, including altered neurodevelopment14 and increased risk of some neurodegenerative diseases,15 is a major concern considering the steady increase in their incidence. Evidence exists for an association between neurodevelopmental or behavioural disorders in children and exposure to wireless devices,14 and experimental evidence, such as the Yale finding, shows that prenatal exposure could cause structural and functional changes in the brain associated with ADHD-like behaviour.16 These findings deserve urgent attention.

At the Oceania Radiofrequency Scientific Advisory Association, an independent scientific organisation, volunteering scientists have constructed the world’s largest categorised online database of peer-reviewed studies on radiofrequency electromagnetic radiation and other man-made electromagnetic fields of lower frequencies. A recent evaluation of 2266 studies (including in-vitro and in-vivo studies in human, animal, and plant experimental systems and population studies) found that most studies (n=1546, 68·2%) have demonstrated significant biological or health effects associated with exposure to anthropogenic electromagnetic fields. We have published our preliminary data on radiofrequency electromagnetic radiation, which shows that 89% (216 of 242) of experimental studies that investigated oxidative stressendpoints showed significant effects.7 This weight of scientific evidence refutes the prominent claim that the deployment of wireless technologies poses no health risks at the currently permitted non-thermal radiofrequency exposure levels. Instead, the evidence supports the International EMF Scientist Appeal by 244 scientists from 41 countries who have published on the subject in peer-reviewed literature and collectively petitioned the WHO and the UN for immediate measures to reduce public exposure to artificial electromagnetic fields and radiation.

At a time when environmental health scientists tackle serious global issues such as climate change and chemical toxicants in public health, there is an urgent need to address so-called electrosmog. A genuine evidence-based approach to the risk assessment and regulation of anthropogenic electromagnetic fields will help the health of us all, as well as that of our planetary home. Some government health authorities have recently taken steps to reduce public exposure to radiofrequency electromagnetic radiation by regulating use of wireless devices by children and recommending preferential use of wired communication devices in general, but this ought to be a coordinated international effort.

© 2018 The Author(s). Published by Elsevier Ltd.
Under a Creative Commons license
Posted in Electromagnetic Radiation.