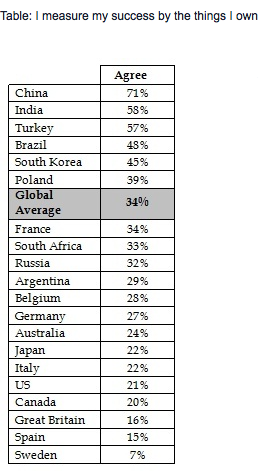 71 percent of Chinese measure their success by the things they own, which is significantly higher than any other nation in the world, a new IPSOS survey on Global Attitudes on Materialism, Finances and Family revealed which was conducted across 20 countries. Indians are the second most materialistic people in the world – 58 percent of Indians measure their success by the things they own. Turkey, Brazil, South Korea and Poland round out the top six on the list for the most materialistic countries. Great Britain ranks at the 18th place with 16% of British measuring their success by the things they own. Swedish people are the least materialistic from all those 20 countries which were surveyed. The Chinese are also the most likely to feel a lot of pressure to be successful and make money. Does this explain why feng shui originates in China? We don’t know how important material success was to Chinese 4000 years ago though, when feng shui was first developed. But a big part of modern feng shui is designed for material and financial success.